The names of most of those who first placer mined in the Angels Camp area are lost to history, but undoubtedly they first found “color” in Angels Creek and its tributaries, including China Gulch. Rock-lined channels, piles of hand-stacked waste rock, and random piles of stream gravels and cobbles are still found throughout the drainages. On nearby Slab Ranch, a “colony” was established in the earliest years of the Gold Rush, settled by prospectors and their families who built cabins and homesteads along Angels Creek and its tributaries.

The rich placer gold in the streambeds was soon depleted and it was not long before the miners traced the source higher up on the hillsides. Early gold mining activities on the Central Hill Channel, just east of Altaville, probably started in the early 1850s on the present Slab Ranch. Extensive drift mining was conducted on Bald Hill throughout the 1860s and 1870s, and intermittently until the 1930s when the Calaveras Central Mine was developed as the largest drift mine in California. The Beda Blood Placer Mine, patented in June of 1888, was located adjacent to and west.

Water for placer mining was first brought into Angels Camp in 1853 by the Union Water Company. Completed to Murphys in 1853, the system was extended to Washington Flat and Angels Camp that same year by utilizing the bed of Angels Creek. Over the ensuing years the system was improved numerous times, especially after its acquisition by the Utica Gold Mining Company in the late 1880s. Taken over by PG&E in 1946, it has recently been acquired by the Utica Power Authority, a consortium of local water agencies. 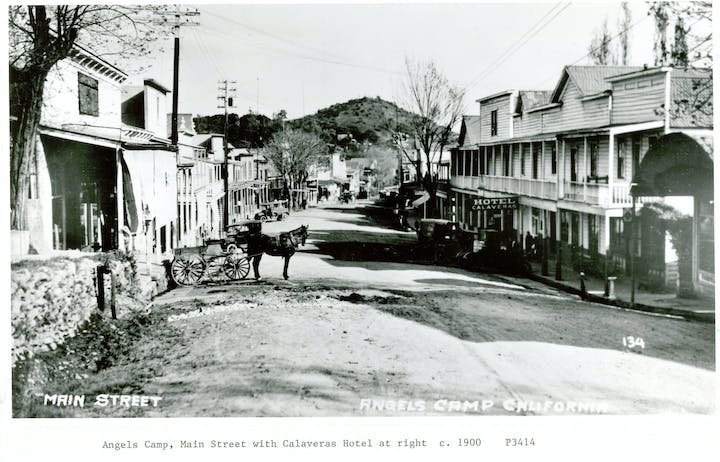 Located about ten miles south of the county seat at San Andreas, Angels Camp was one of the earliest important mining communities along the Mother Lode region of California.  Situated in southwestern…