The area that is now San Andreas had been inhabited by Native Americans for several thousand years before the discovery of gold in 1848, when the first gold seekers traveled up the Calaveras River and its tributaries in search of the precious metal. A reporter for the San Andreas Independent recounted its Euroamerican beginnings:

In the winter of 1848, a few Mexicans encamped at the works of the Gulch (since called San Andreas) about one-fourth of a mile above where the town now stands, and commenced working in the bed of the Gulch by sinking holes and working out with bateas. In the fall of 1849, their number was considerably increased, but the place was not looked upon as worthy of any great note as a mining locality. In the winter of 1849, or spring of 1850, a few Americans came in and commenced operations in the main gulches, which soon had the tendency to bring in others.

In the meantime, the Mexican population continued to increase until, in the winter of 1850, they numbered 1,000, most of them camping on the hill where the town of San Andreas is now located. On all sides were seen small tents, such as usually designated any important mining locality in the prosperous days of 1848-1850 (San Andreas Independent, September 24, 1856).

By the fall of 1850, surface gravels in and around San Andreas had been nearly worked out, but in 1852 dry diggings were discovered on Gold Hill, a mile west of town on a segment of the main Tertiary channel. The spring of the following year the town was described:

The Mexicans formed by far the most numerous part of the population. The streets—for there were two streets at right angels to each other—and the gambling-rooms were crowded with them, loafing about in their blankets doing nothing. There were three gambling rooms in the village, all within a few steps of each other, and in each of them was a Mexican band playing guitars, harps, and flutes. Of course, one heard them all three at once, and as each played a different tune, the effect, as may be supposed, was very pleasing.

"f one can imagine the booths and penny theatres on a race-course left for a year or two till they are tattered and torn, and blackened with the weather, he will have some idea of the appearance of San Andres. It was certainly the most out-at-elbows and disorderly-looking camp I had yet seen in the country" (Borthwick 1948:256).

That same year, however, the upstream segment of the “Old Channel” was discovered under Douglas Hill, and “the mines were in full blast—every gulch which would pay was developing its treasure into the strokes of industry” (San Andreas Independent, July 30, 1859), and with shafts and tunnels, gravel miners followed it through the main part of town, until by 1859 there were more than 80 gravel mines working (Limbaugh and Fuller 2004:20).

By 1859 most of the good mines had been exhausted, and the last good pay made in 1857, with only surface miners satisfied with small wages working after that time. As a reporter noted:

But the stranger who is shown around through our broken-up and rock-strewn ravines, where only the solitary chimney or dismantled cabin show that they were once inhabited, will be astonished at the information he will receive of a 'splendid claim' once here, a wonderful 'prospect' obtained yonder, or somebody’s 'pile' taken years ago from a spot now covered with heaps of dirt and gravel. But with the fortunate finders of the golden drops, the 'glory of Zion is departed.' The gulches are being deserted and will soon be left desolate (San Andreas Independent, July 30, 1859).

By the mid-1860s only Chinese miners were mining in town, reworking the claims abandoned by the Mexican and Euroamerican miners.

The name of the town is presumed to have come from a tent church called San Andreas (now St. Andrews), first used by the Mexican population of the community. When visited by J.D. Borthwick in the spring of 1853, it was described as a canvas structure with a small wooden cross surmounted on the roof over the door. The only “fitting up” was an altar, mostly decorated with “California candlesticks,” old claret and champagne bottles. The church was mostly occupied by Mexicans, with the women nearest the altar. The officiating priest, a Frenchman, afterwards gave a sermon in Spanish, “which was listened to attentively” (Borthwick 1948:257).

In 1853 three stone buildings were erected, the first fireproof structures in the town. These included the American Hotel (present County Archives), the Sullivan & Corcoran Store, and the Kohlberg Store (neither extant). The fire of February 1856 burned all but the stone buildings on Main Street, but they were soon rebuilt, this time with more stone and brick. The brick I.O.O.F. Hall and Masonic Hall, constructed by Putney and Eppley, was one of these, as were the 1857 Cornell and Bowman Tin Shop and Tassaro Stone Store. The early streets were named Spanish Avenue, French Street, and China Street, attesting to the large foreign-born population.

The third major fire in June 1858 destroyed numerous commercial and private buildings and it was in the aftermath that most of the brick and frame Classical Revival buildings extant from the 1850s were constructed. Brick buildings included the 1858 McGlim Saloon, 1858 Crowley’s Empire Bakery and Restaurant, 1859 Ganz and Prag Store, and the 1859 Wolfstein Cigar Store. Several frame commercial and residential buildings were constructed at this time also.

Prosperity was brief, however, for a newspaper account in 1865 reported:

San Andreas may be considered as a kind of capital for the mining region of the Calaveras, and its present condition may be briefly described by saying that it has 'caved in.' It has been a place of consequence. Many of the buildings are of brick or stone with iron shutters, etc., but most of these and many of the frame buildings are untenanted. Our landlord told us that there were none but Chinese working in the placers, and that, though there were quartz mines in the vicinity, they were mostly in the hand of persons who neither had the capital to work them, nor would care to use it for that purpose if they had. As to the placers giving out, I cannot say I am sorry for it. They make the face of the country a repulsive wilderness wherever they are worked, and they are so uncertain that the population which works them must always be migratory and unsettled in their habits" (San Francisco Bulletin, May 14, 1865).

All this was soon to change, for in 1863 it had been voted to establish the county seat, which had previously been moved from Double Springs to Mokelumne Hill, to Jackson, and back to Mokelumne Hill, in San Andreas. It wasn’t until after a superior court decision, however, that the actual move was accomplished in 1867. The first court was held in Sharp’s Theatre, but soon after a new courthouse was erected at a cost of $14,300 by architect and builder D. L. Morrill.

This move created another building boom in the small community, for homes for the employees who were to staff the county offices, and for the additional business and professional people who moved to San Andreas to serve them. The town’s population remained relatively stable from the 1870s to the turn of the nineteenth century, with the next boom period coinciding with the opening of the hard rock gold mines north of town, primarily the Ford and the Fellowcraft, as well as in nearby Fourth Crossing and Gold Strike.

Miners and businessmen flocked to the area, but the boom was short lived. It was during this period, however, that the county government expanded their facilities. In 1893 they hired the eminent San Francisco Bay Area architect William Mooser to design the Romanesque Hall of Records on Main Street.

The next boom occurred with the opening of the Calaveras Cement Plant south of town in 1926. Homes were built by the employees, commercial properties were developed, property was subdivided, and many older buildings, including several of the historic brick and stone buildings on Main Street, were remodeled to reflect the Mission Revival architecture then in vogue.

From the 1950s through the present, more subdivisions have been constructed and the county government has continued to develop. Today, many of the county employees reside outside of San Andreas and commute to work, and since the cement plant closed in the early 1980s, the community has again entered into a more stable period of growth. 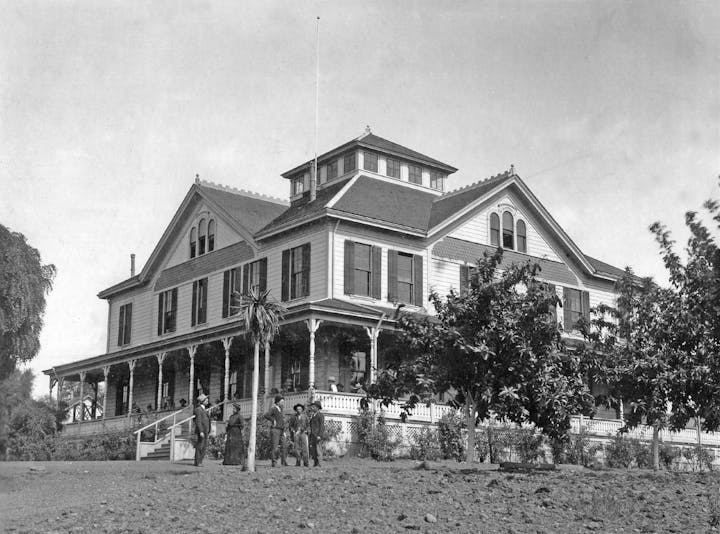 The first county hospital was established at Pleasant Springs in 1858, and remained there until 1869, when it was moved to the Gold Hill Road House west of town, near the intersection of Highway 49…