The earliest routes into the gold regions followed long-established Indian trails. As Native American trails were superseded by stage and wagon routes, roads became increasingly important after the advent of the automobile and eventually became State Routes 49, 12, 26, and 4. Railroads, completed to the lower elevations of the county in the 1870s and 1880s, provided the impetus for the development of the lands in the western part of the county.

The first route into Murphys and the Stanislaus Diggings followed the Antelope Trail, also known as the “Old Stockton Trail,” and “Marshall’s Trail.” The most direct route from Stockton to the Calaveras mining camps, it followed a route which led easterly from the Plains over the Antelope Trail through Salt Spring Valley and over Bear Trap Gap to Nassau Valley, Alabama House, Kentucky House, and on to San Andreas, as well as to Angels Camp, Murphys, and the Stanislaus River ferries. From San Andreas to Angels Camp, it reversed the route, following the route from Kentucky House to Alabama House, over the hill to Fourth Crossing, then to Fifth Crossing (Hawkeye), and on to Angels. By 1854 it had been improved to handle wagon traffic, but by 1859 it was known as the “old road,” having been superseded by the route of present State Route 49 to Angels Camp down Scott’s Grade to Calaveritas Creek, constructed in 1854-55.

The wagon roads from the Southern Mines’ principal source of supply at Stockton were at first few and difficult. The earliest and most traveled road to the northern portion of the county was the Stockton to Mokelumne Hill Road along the Calaveras River (followed closely by present State Route 26). It served camps along the way, camps on the Mokelumne River to the north, and Angels and Murphys camps through a branch stretching south from San Andreas. Another branch of the road passed through Jenny Lind to Salt Spring Valley, where it connected with the Stanislaus ferry roads.

In the San Andreas area, the “Old Stockton Road,” established in the earliest years of the Gold Rush, was superseded by the “New Stockton Road” in 1856. It coursed northeasterly from Stockton to North America House and on to San Andreas, approximately along the route of present State Route 12.

The Mokelumne Hill-San Andreas Road was another early road, connecting “The Hill” with San Andreas, Angels Camp, and the mining camps in Tuolumne County. Known at various times for its most important destinations, in 1859 as the Mokelumne Hill to Murphys Road, and in 1869 the segment southerly from San Andreas was known as the San Andreas to Columbia Road. This route follows the approximate route of today’s State Route 49.

The present Highway 4 alignment follows the approximate route of an early emigrant trail over the Sierra Nevada that was improved in 1855-56 and known as the Big Tree Road and in the early 1860s as the Big Tree and Carson Valley Turnpike. Originally a free trail, it became a toll road from 1864 through 1910, and then a free county road in 1911. It was accepted into the state highway system in 1926 and portions were paved in the 1930s. The road was realigned in the mid-1960s when the Bear Valley Ski Resort was opened, making it an all-weather highway. 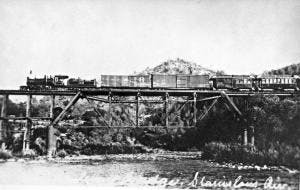 In the late 19th century, economic development of the Mother Lode depended on it being linked via railway to the commercial networks of the western United States. Calaveras was served by three railroads: the Stockton and Copperopolis, the San Joaquin and Sierra Nevada, and the Sierra Railway.