An iron shutter, namesake for Mokelumne Hill’s Shutter Tree Park, came from prominent Chinese merchant Chung Kee’s stone store. Surviving the fire of 1898 and exodus of the local Chinese population, Kee’s store fell into ruin by 1910. One of its fallen shutters became encased within ailanthus trees (Chinese trees of heaven) which grew together to become a landmark on the corner of Main and Center Streets. When the town turned the corner lots into a park in 1977, the imposing tree and its relic inspired the name Shutter Tree Park. Twenty years later the tree died. The rescued iron shutter will now be fittingly featured in a sculpted art mural overlooking the site of Chung Kee’s store.

The historic alianthus tree with its iron shutter was located next to the historic site of the largest store in Chinatown owned by successful entrepreneur Chung Kee (Figure 1). Initially purchasing a store in San Andreas in 1868, Kee moved to Mokelumne Hill by 1872, establishing himself in his stone building in the heart of Chinatown. Over the next two decades, Chung Kee expanded his original store and purchased virtually all of the Chinatown frontage on East Center Street including a lumber yard, stable, warehouse, the Taoist temple, and more than a dozen wooden dwellings. In 1887, he also obtained ownership of the prosperous What Cheer mine in nearby Chili Gulch.

Chung Kee’s wife Kim had joined him in 1870, along with their 10-year-old son, and bore at least two more children in Mokelumne Hill (Figure 3). Chung Kee, Kim, and their children apparently returned to China in the mid-1890s as legal transactions after that time were conducted by an agent.

Although Chung Kee’s store and lumber yard on Center Street survived the fire of 1898, most of Chinatown was destroyed and the community never recovered. While nearly 100 Chinese were recorded in Mokelumne Hill in 1880, only 14 were counted in the 1900 census. By 1912, the stone store was in ruins (Figure 4) and by 1930, all Chinatown structures on this block were gone. Only the ailanthus tree and its enclosed shutter remained.

Reaching almost 50 feet high by 1970, the Shutter Tree was a landmark on the corner of Center and Main Streets, then an open space featuring popular horseshoe pits and serving as a venue for local celebrations. When the town decided they wanted an official and improved community park, the work of transforming the vacant lot was taken up by the Mokelumne Hill Community Club. In 1973, Bob Rosenthal, former owner of Hotel Leger, and his family agreed to trade their two downtown park parcels to the Mokelumne Hill Veterans Memorial District for a portion of donated Marredda land on the east edge of town.

San Francisco landscape architect John G. Grace, residing in his renovated Mokelumne Hill Peek Inn with daughter Stephanie, volunteered to design the park. He featured the Shutter Tree—the park namesake—within an open lawn bordered on the west and south by retaining walls and benches. The southern elevated park section was reached by a wide stairway leading to play equipment and horseshoe pits, with a restroom facing China Gulch. Labor was supplied by the County’s Comprehensive Employment Training Act (CETA) crew. Rhyolite stone for the retaining walls was donated by Ray Garamendi, while 30 historic cut stone blocks from the old Mokelumne Hill Soda Works property were donated by Chester Stegman and placed around the park perimeter. An historic stone wall just north of the Main Street arbor was incorporated into the design.

Costs for the new park totaled $32,336, with $9,000 obtained from a State Recreational Fund grant (championed by Senator John Garamendi), about $17,000 from CETA work, and $6,500 in donated real estate. In addition were uncounted volunteer labor and contributions from the Community Club and other town residents. Construction began early in 1977 with the dedication ceremony held on May 30.

While the park was enjoyed by the townsfolk, the Shutter Tree suffered. The graded and leveled lawn area had added several feet of earth to the base of the trunk and watering the surrounding grass caused the tree’s roots to rot. In 1995, the dead tree was nearly consumed by a fire extinguished by volunteer firefighters. The following year the hazardous tree was cut down to a seven-foot height, its still-trapped shutter half buried underground.

The Mokelumne Hill Veterans Memorial District, owners of Shutter Tree Park, became increasingly unhappy with this historic relic in the middle of their park’s lawn. The stump and shutter were safety hazards and generally unsightly, and the shutter could be stolen or, perhaps worse, rot away underground. The historic importance of the icon, however, was universally agreed upon. The solution was an archaeological excavation to rescue the shutter, so a volunteer participation day was advertised: Saturday June 27, 1998. Archaeologists Julia Costello, Tim Kennedy, and Alice Olmstead oversaw the efforts of some 40 townsfolk, ages one to 80, including Katie May Aldrich, Kevin Brady, Jane Canty, Casey and Nick Klotz, Brady McCartney, Lori Brown Noyd, Ron and Sean Pitner, Emelio and Hazel Prunetti, Malila Szabados, and Barry Young.

A five-by-five-foot excavation unit was dug around the shutter. Removed earth was screened for artifacts, yielding clear, black, and aqua-colored bottle fragments, square-cut nails, ceramic shards, and a kaolin pipe stem. The shutter base rested on the historic ground level, some 20 inches below the park’s lawn surface. The shutter measured nearly seven feet tall and 20 inches wide, was constructed of three sections joined by riveted iron strips, and hung on two pivot hinges. It was in surprisingly good condition.

As part of the excavation project, long-time residents were interviewed about the history of the Shutter Tree. Both Hazel Lloyd Yocom (b. 1921 in West Point) and Flossie Casaretto Sabatini (b. 1915 at Middle Bar) recalled that the shutter was wrapped up in the tree since the 1930s, most of it quite visible. Ivy Dahl (b. 1921 in Mokelumne Hill) recalled that in 1929 or 30 there were two small trees next to the ruins of the Chinese buildings and that the iron shutter, associated with the store’s basement, was placed between the two trees intending for it to be grown around. When Ivy was asked what should be done with the shutter once it was removed from the ground, he responded: “Preserve it! Maybe make a concrete trunk, like the Shutter Tree, and put the shutter in that. You could put up a plaque and say what it was and then preserve it.”

Amazing how closely Ivy Dahl’s idea is playing out. After some twenty years of waiting, the shutter now has a place of honor in Anne Cook’s Shutter Tree Wall Project, overlooking the town park.  It is encased in the base of a plaster tree crafted by Scott Greer, with limbs spreading over the library wall and eventually sheltering mosaic scenes of the town’s history. Chung Kee’s shutter has regained its place of honor in Shutter Tree Park. 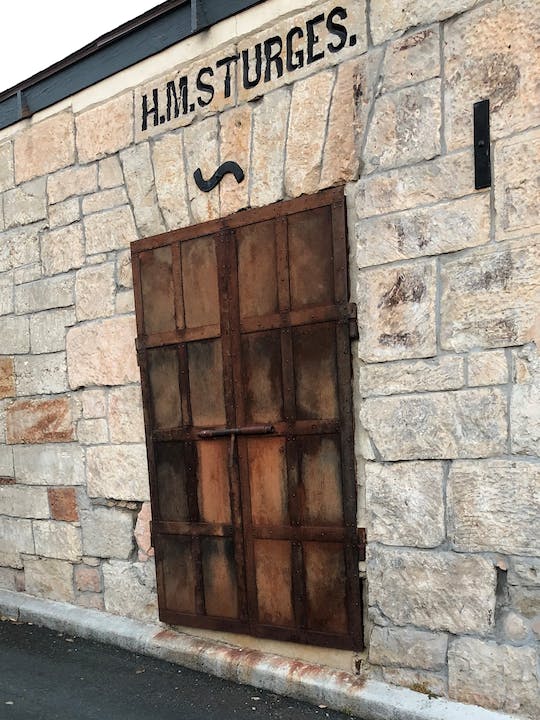 Iron shutters were placed over doors and windows of Mother Lode buildings primarily for fire prevention and also for deterring theft. However, it was regular catastrophic fires that prompted…